Use the NPC Codex to keep track of important characters you come across while adventuring. Many times you need to reference these characters again later in the game. Click the blue "Full Profile" button at the bottom of the character card to view their full profile page. The "Quick Edit" button gives you a trimmed-down form for details that change more often during gameplay for making quick changes. The "Edit" button will take you to the full edit page. Only GMs and RecordKeepers have access to the Edit and Quick Edit buttons.

The Player Codex is similar to the NPC Codex, but for player-owned characters instead. Add everyone from your main to your mount! Click the "New Character" button in the top right of the Player Codex page to get started. In order for the character to show up in Codex, it must be assigned to a player in the campaign. Do this at the bottom of the form by selecting a player in the "Player" dropdown. The "Special" dropdown is used to denote if the character is a mount, familiar, etc. Selecting "Main Character" in the "Special" dropdown, assigns that character to the player and will show up on your Party Info page. 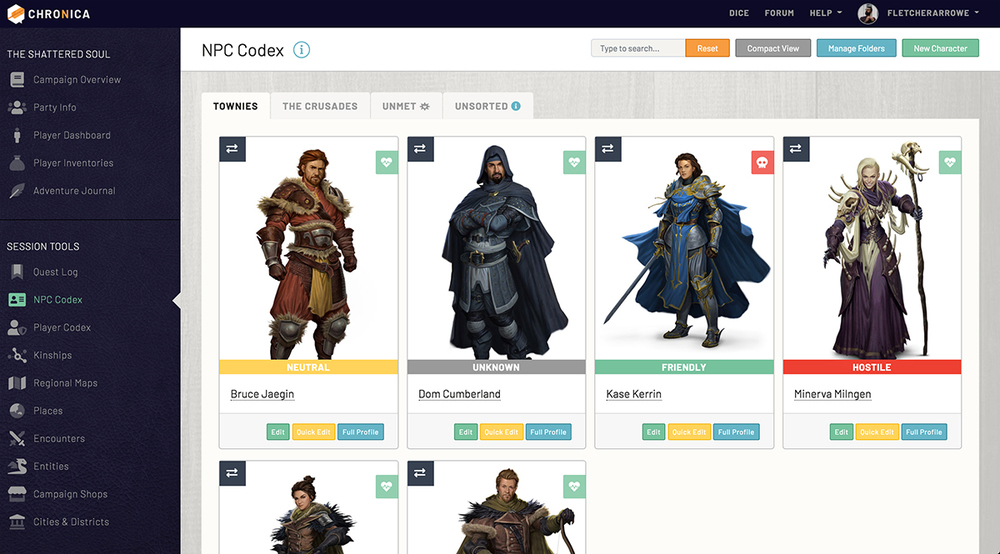 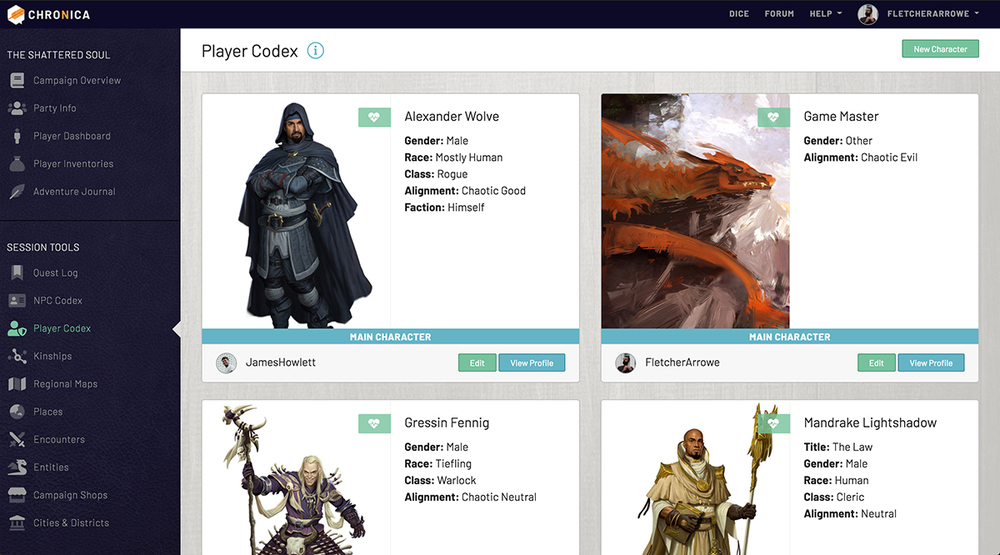 To create an NPC or PC, go to either codex page in the left navigation of your campaign, and click the green "New Character" button in the top right.

The character form is quite large, but only fill out the information you need or want for your gameplay style.

Enter a Name in the first field. Select a Gender in the next field, if applicable. If you select "Other", you can write in your own option.

The Status dropdown allows you to select the current known status of the character to track things like death, missing, or imprisoned, etc.

If you are a Game Master, you will see the next section of options which allow you to choose an NPC Folder to put the character in (if an NPC), a Profile Template, and whether or not to mark the character Secret. If the character is marked secret, but is assigned to a player, it will still be visible at this time. The secret toggle currently only applies to NPCs.

This section contains the data inputs for the main character card stats.These stats are what you can see when you flip the cards on the NPC Codex. They also display on the large Player Codex cards. The labels are preset to stats that are widely used, but you can change these by creating a Profile Template, filling in the override boxes, and then assigning that profile template to the character.

If you have stats created under the Character Stats Admin, you will see those stat types show up here. By clicking each panel, it will expand to show the inputs and allow you to edit them.

This section gives you two main rich text editors to enter a Description and Notes. If you are a Game Master, you will see a third editor for GM Secrets. If this character has been saved as a PC, you will see an additional box labeled Personal Secrets. This can be used by the owner of the PC to save information that only they and the GMs have access to.

You can either select an image from the Image Library or upload your own. If you have an uploaded image, it will override the library selection. To use your library selection, remove the uploaded image by selecting the Remove Image checkbox and updating the character. The image library is available on Knight, Monarch, and Deity tiers.

If this character belongs to a player, select them in the Player dropdown of this section. Game Master's can assign characters to any player. A player will only see their own name in this box. The Special Label dropdown can be used to label the character for further identification.

The Special Label dropdown can also be used to mark a "Controlled NPC". This is an NPC that needs to be controlled by a Player in order to track their inventory or wealth. Controlled NPCs show up in their own folder on the NPC Codex.

The character profile contains a wealth of information. Your description, notes, GM notes, and similar information will appear if there is data to show.

The Flair box is used to add custom blurbs to a character that do not fall under a Stat or Ability. Use this space to add character flaws, custom special abilities, or even obscure information like their favorite cheese.

Character Connections are used to add a link to another character that they have some sort of relationship with. Spouses, enemies, captains, etc. You can link the character with a title (Ex: Father) and some extra notes if needed. If this character is part of a city staff, or shopkeeper, that connection will show here as well. The connections are one-way at this time, so you will need to create the connection with details on both characters to have a two-way connection.

If this character is ranked in a Kinship, they will have a Kinship Ranks box that lists these ranks out with their emblems.

Links are used if you need to keep extra links handy for that character. You can link offsite or to another Chronica page. Link to a spellbook, a character sheet, or family tree, etc.

The Personal Secrets box appears on Player Characters and is only visible to the player that owns the character and Game Masters.

To create your character sheets, you will use a combination of the features below. Click on the guides for more in depth information about each:

The NPC Codex is able to be organized into folders. If you are a GM, click the blue "Manage Folders" button at the top to get started. You can add new folders using the green "New Folder" at the top. By marking a folder secret, the folder and any NPCs inside will be hidden on the Codex from players. However, unless the character itself is marked secret, it may still appear elsewhere on your campaign (via connections or in kinships, etc). Edit a folder by clicking the green "Edit Folder" button in the corresponding table row.

You can sort your folders by drag-and-dropping the handle icon in the left of the table. The order is saved as soon as you move a table row. 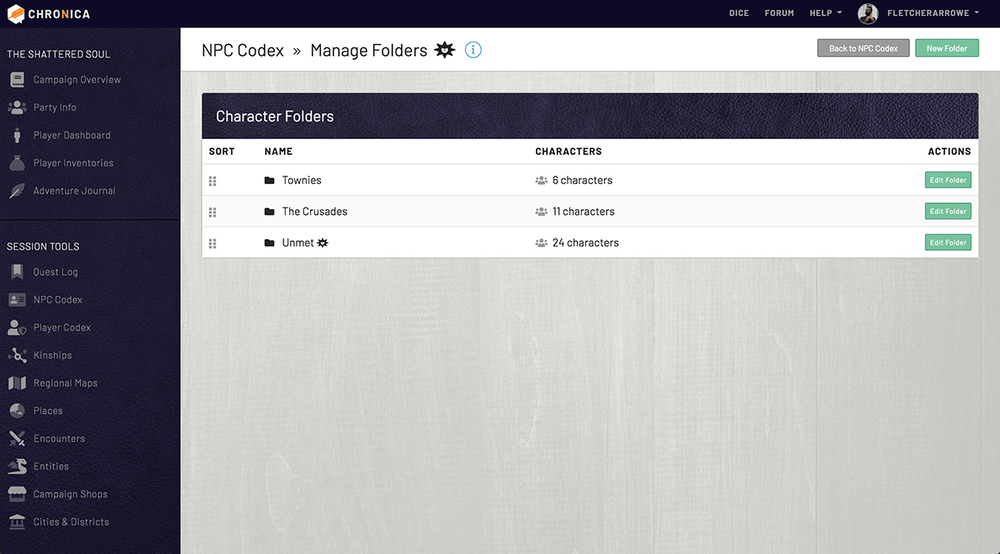